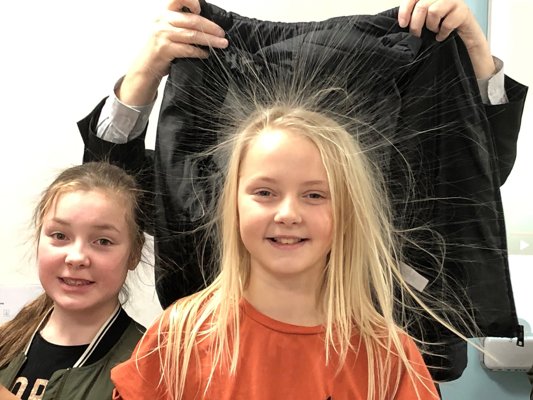 On the last day of term, just before the Christmas break, Year 7 students Summer and Mary-Jane enjoyed finding out all about the Van de Graaff generator in Mr Chadwick's Science class during the non-uniform day.

The Van de Graaff generator is an electrostatic generator which uses a moving belt to accumulate electric charge on a hollow metal globe on the top of an insulated column, creating very high electric potentials and when Year 7 students place their hands on the metal globe their hair stands on end!

The American physicist Robert Jemison Van de Graaff invented the Van de Graaff generator in 1931. The device that bears his name has the ability to produce extremely high voltages, as high as 20 million volts. Van de Graaff invented the generator to supply the high energy needed for early particle accelerators. These accelerators were known as atom smashers because they accelerated sub-atomic particles to very high speeds and then "smashed" them into the target atoms. The resulting collisions created other subatomic particles and high-energy radiation such as X-rays. The ability to create these high-energy collisions is the foundation of particle and nuclear physics.

Students always enjoy using the generator and it's a really good starting point for discussing electricity. You can read more about it by clicking here.