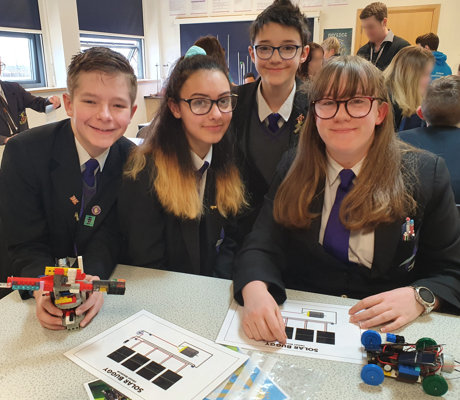 British Science Week is a ten-day celebration of science, technology, engineering and maths and this year took place between 6th and 15th March. As part of that celebration Year 8 students Kobi, Harrison, Sophia and Natalie attended a Sciathlon at Blackpool Sixth Form competing against other students from Blackpool secondary schools.

The Sciathlon consisted of three challenges, the first being to find two solutions with the same reaction time as the men's world 800m time.

Team Aspire found that by diluting one of the solutions down with water the reaction time could be controlled to get the correct time.

Kobi said, “The reaction was easy to see when it had completed, as the solution went from clear to black”.

Challenge number two was an engineering round seeing each team building a solar buggy using four solar panels, some wires to make a circuit and finally Lego to build the outer layer. After a few practise-runs Team Aspire constructed their final test buggy which was able to move using solar power provided by overhead lamps charging the buggy’s battery; an impressive 13 seconds of movement was their final time.

As a second part to the engineering round the team also had to build a water turbine using Lego. Placing the completed model in water, the challenge was to see who could get the highest voltage, and although their first turbine fell apart, Team Aspire persevered and achieved a voltage of 57 volts. The final challenge was a STEM quiz consisting of questions on science, technology, engineering and maths. Unfortunately, Team Aspire didn't come first but did finish a credible 6th place.

Natalie said, “We would like to congratulate Armfield Academy for winning. And although we didn’t win, we had a really amazing time and a fantastic experience”.