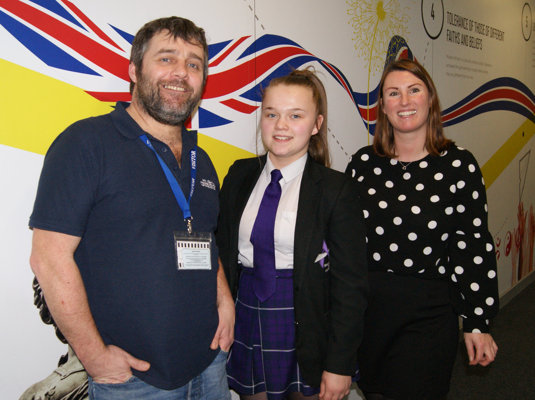 Tim from the charity Every Action Has Consequences, came in before Christmas to speak to a group of students from Year 8 to Year 11 about the consequences of anger and violence.

Unfortunately, back in 2009 Tim's brother, Adam, was killed after being punched once by a 16 year old on a night out.

Tim told Adam's story, which touched many of our students, and he spoke at length about having the courage to walk away and not become involved in violent situations, even when we get angry.

Madison, who is pictured above with Tim and Miss Isherwood, was part of the group and arranged for a cake and hot dog sale to raise money for the charity.

Matthew Guy, Flavius Lebanov and Shania Parwez also helped with selling the cakes and hot dogs on the 17th January.

In total we raised £81.40, which Tim was overwhelmed by when he returned to speak to all of Year 10 on Aspiration Day in January.

You can find out more about Every Action Has Consequences at http://www.eahconsequences.com/