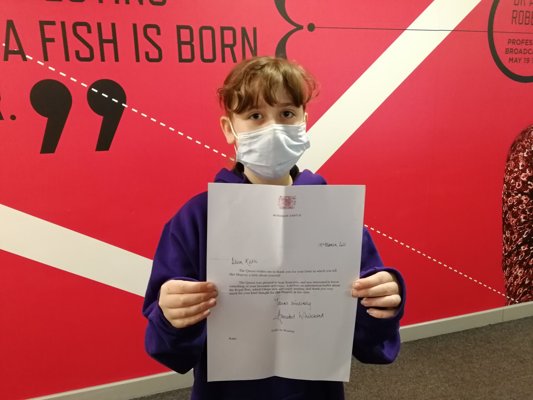 Year 7 Katie loves writing; stories, letters, articles, essays, it doesn’t matter what style it might be, putting pen to paper or tapping away at a keyboard is what fires her imagination.

It was during a recent English lesson on poetry that Katie wondered if The Queen also enjoyed the subject and decided to put her love of the written word to good use and write a letter to her to find out. In the letter Katie described a little about herself, some of her favourite hobbies and hoped The Queen was coping well during the pandemic.

It wasn’t long before Katie’s letter received a reply from Windsor Castle, and although it wasn’t signed by Her Majesty, it was a response from Annabel Whitehead, The Queen’s Lady-in-Waiting, in which she thanked Katie for her letter and included some leaflets about Her Majesty’s animals and pets.

The Queen routinely receives 300 letters from the public every day; some of these letters the Queen reads and replies to personally. With others, though, Her Majesty instructs members of her staff how she would like them to be answered.